[00:59.65]Good morning everyone.
[01:01.93] Last week we were looking at the hunter-gatherers in Ireland, across the Irish Sea from England.
[01:07.83] Today, we're going to move on to the period between four and six thousand years ago, known as the Neolithic period, which is when a total farming economy was introduced in Ireland.
[01:20.73]Now, there are several hypotheses about the origins of the first Neolithic settlers in Ireland, but most of these contain problems.
[01:29.66] For instance, there are considerable archaeological difficulties about the theory that they came from England.
[01:36.22] The evidence doesn't really add up.
[01:38.61] But there are even greater practical problems about the theory that they came directly from continental Europe.
[01:45.41] For one thing, it's not clear just how sufficient numbers of men and women could have been transported to Ireland to establish a viable population.
[01:56.10] As you know, the hunter-gatherer economy which existed beforehand was based on small scattered groups.
[02:03.79] The farming economy would almost certainly have required much larger communities to do all the work needed to plant and tend sufficient crops to sustain them through the year.
[02:14.42]The early farmers kept various animals, including cattle and sheep.
[02:20.25] There's also evidence of pigs, but it is possible that these could have been descended from the native wild species.
[02:27.13] Now, we know from modem fanning that if the level of breeding stock falls below about three hundred females, the future of the species locally is at risk.
[02:38.72] So we must assume that from the beginnings of Neolithic farming the number of breeding sheep would have considerably exceeded three hundred, and the national cattle herd must have been similar size.
[02:51.30] The question is how these were brought to the area and where they came from.
[02:56.25]It’s usually suggested that the Neolithic settlers used skin-covered boats to transport livestock.
[03:03.30] But this method would have severely restricted the range of the colonising fleets.
[03:08.00] The sheer volume of animal transport necessary means it’s unlikely that this livestock could have been brought from anywhere further than England.
[03:17.21]What about crops?
[03:19.47] Well, two main cereal crops were introduced to Ireland during this time: wheat and barley, both in several varieties.
[03:28.22] The main evidence for their presence consists of impressions on pottery, where a cereal grain accidentally became enbedded in the surface of a pot before it was fired.
[03:39.96]The grain itself was destroyed by the firing, but it left an impression on the pot which could be studied and identified by botanists.
[03:53.21]Let's turn our attention now to the farming technology available at that time.
[03:58.30] Before the cereal crops could be planted, it would have been necessary to clear the forest and to break the ground by ploughing.
[04:06.90] The stone blade of a plough has beeiscovered during excavation in County Mayo in western Ireland.
[04:13.70] The body of the plough would have been of wood and could have been drawn by people, but it’s also likely that cattle were used.
[04:20.99]Now, the cultivation of crops and the husbandry of livestock brought about changes in people's lifestyle such as the type of shelters they made.
[04:31.36] For one thing, instead of moving from place to place they needed permanent dwellings.
[04:37.57]The stone axes used to chop down trees to make these dwellings were far superior to any that the Stone Age hunter-gatherers used.
[04:46.43]To make the axes, sources of suitable stone had to be found and systematically exploited.
[04:53.92] These so-called ‘axe factories’ were really quarries rather than factories, as the manufacture of the axes wasn't regularly performed on the quarry site.
[05:03.92] However, after the axe had been chipped into shape, they needed water and sand for grinding and polishing, so a high mountainside wouldn't have been an appropriate place for this.
[05:15.81] So this final stage of the manufacture must have been carried out close to water and sure enough, there's ample evidence of this at coastal sites.
[05:25.87]Now it’s clear that these Neolithic axes were transported all over Ireland, as well as to Scotland and the south of England.
[05:34.39] It's not really surprising that axes from ‘axe factories’ in England have also been found in Ireland.
[05:40.77]At the very least, this indicates that there was a link between the two islands during that period.
[05:46.78]One of the most useful innovations of the colonisers was pottery making, which was quite unknown to Irish hunter-gatherers.
[05:54.77] The pottery was probably made by shaping day into a ball with the hand, and then hollowing it until the walls were the right thickness.
[06:02.64] After firing, the outside was often polished.
[06:06.13] This would have helped the pots to retain water, as they weren't glazed.
[06:10.15] Now we know that the clay used usually came from local sources, which suggests that manufacture was on a fairly small scale, even though thousands of fragments are usually found at Neolithic sites.
[06:23.43]In the course of time decoration began to appear.
[06:27.24] At first this looked like a series of stitches and was just around the tops of the pots.
[06:32.59] This could have been an imitation of earlier vessels which were made of leather sewn onto wood.
[06:37.96] Then eventually pots with decoration all over…

Choose the correct letters A, B or C. 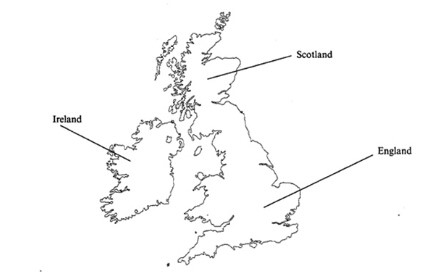 According to the speaker, it is not clear

32.What point does the speaker make about breeding animals in Neolithic Ireland?

33.What does the speaker say about the transportation of animals?

34.What is the main evidence for cereal crops in Neolithic Ireland?

Complete the sentences below.

Write NO MORE THAN TWO WORDS for each answer.

35. Ploughs could either have been pulled byor by cattle.

• The farmers needed homes which were permanent dwellings.

36. In the final stages of axe-making, andwere for grinding and polishing.

38. Theof the pots was often polished to make them watertight.

40. Decoration was only put around theof the earliest pots.