The Search for the Anti-aging Pill原文翻译和答案解析

The Search for the Anti-aging Pill

As researchers on aging noted recently, no treatment on the market today has been proved to slow human aging - the build-up of molecular and cellular damage that increases vulnerability to infirmity as we grow older. But one intervention, consumption of a low-calorie* yet nutritionally balanced diet, works incredibly well in a broad range of animals, increasing longevity and prolonging good health. Those findings suggest that caloric restriction could delay aging and increase longevity in humans, too.
* calorie: a measure of the energy value of food

Unfortunately, for maximum benefit, people would probably have to reduce their caloric intake by roughly thirty per cent, equivalent to dropping from 2,500 calories a day to 1,750. Few mortals could stick to that harsh a regimen, especially for years on end. But what if someone could create a pill that mimicked the physiological effects of eating less without actually forcing people to eat less? Could such a ‘caloric-restriction mimetic', as we call it, enable people to stay healthy longer, postponing age-related disorders (such as diabetes, arteriosclerosis, heart disease and cancer) until very late in life? Scientists first posed this question in the mid-1990s, after researchers came upon a chemical agent that in rodents seemed to reproduce many of caloric restriction's benefits. No compound that would safely achieve the same feat in people has been found yet, but the search has been informative and has fanned hope that caloric-restriction (CR) mimetics can indeed be developed eventually.

The benefits of caloric restriction
The hunt for CR mimetics grew out of a desire to better understand caloric restriction's many effects on the body. Scientists first recognized the value of the practice more than 60 years ago, when they found that rats fed a low-calorie diet lived longer on average than free-feeding rats and also had a reduced incidence of conditions that become increasingly common in old age. What is more, some of the treated animals survived longer than the oldest-living animals in the control group, which means that the maximum lifespan (the oldest attainable age), not merely the normal lifespan, increased. Various interventions, such as infection-fighting drugs, can increase a population's average survival time, but only approaches that slow the body's rate of aging will increase the maximum lifespan.

The rat findings have been replicated many times and extended to creatures ranging from yeast to fruit flies, worms, fish, spiders, mice and hamsters. Until fairly recently, the studies were limited to short-lived creatures genetically distant from humans. But caloric-restriction projects underway in two species more closely related to humans - rhesus and squirrel monkeys - have made scientists optimistic that CR mimetics could help people.

The monkey projects demonstrate that, compared with control animals that eat normally, caloric-restricted monkeys have lower body temperatures and levels of the pancreatic hormone insulin, and they retain more youthful levels of certain hormones that tend to fall with age.

The caloric-restricted animals also look better on indicators of risk for age-related diseases. For example, they have lower blood pressure and triglyceride levels (signifying a decreased likelihood of heart disease), and they have more normal blood glucose levels (pointing to a reduced risk for diabetes, which is marked by unusually high blood glucose levels). Further, it has recently been shown that rhesus monkeys kept on caloric-restricted diets for an extended time (nearly 15 years) have less chronic disease. They and the other monkeys must be followed still longer, however, to know whether low-calorie intake can increase both average and maximum lifespans in monkeys. Unlike the multitude of elixirs being touted as the latest anti-aging cure, CR mimetics would alter fundamental processes that underlie aging. We aim to develop compounds that fool cells into activating maintenance and repair.

Cells use the glucose from food to generate ATP (adenosine triphosphate), the molecule that powers many activities in the body. By limiting food intake, caloric restriction minimizes the amount of glucose entering cells and decreases ATP generation. When 2DG is administered to animals that eat normally, glucose reaches cells in abundance but the drug prevents most of it from being processed and thus reduces ATP synthesis. Researchers have proposed several explanations for why interruption of glucose processing and ATP production might retard aging. One possibility relates to the ATP-making machinery's emission of free radicals, which are thought to contribute to aging and to such age-related diseases as cancer by damaging cells. Reduced operation of the machinery should limit their production and thereby constrain the damage. Another hypothesis suggests that decreased processing of glucose could indicate to cells that food is scarce (even if it isn't) and induce them to shift into an anti-aging mode that emphasizes preservation of the organism over such ‘luxuries' as growth and reproduction.

29.There is scientific evidence that eating fewer calories may extend human life.

30.Not many people are likely to find a caloric-restricted diet attractive.

32.In experiments, rats who ate what they wanted led shorter lives than rats on a low-calorie diet.

Classify the following descriptions as relating to

35  Monkeys have been shown to experience a longer than average life span. 35

Complete the flow-chart below. 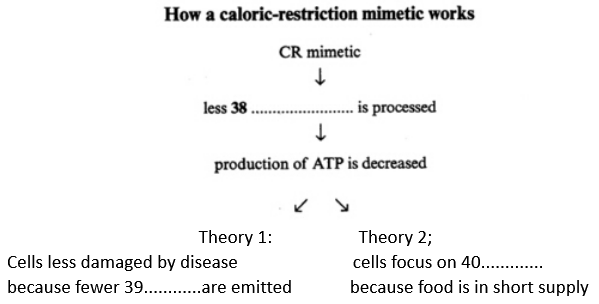